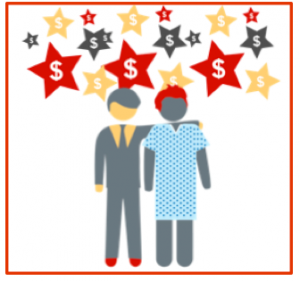 Pharmaceutical marketers have been talking about Empowered Patients ever since I joined Pfizer Pharmaceuticals in the mid-90’s as one of their first consumer marketing hires. But despite all the talk, most pharmaceutical companies are nowhere near being patient-focused.

Pharma marketers know things are changing but are holding onto the HCP-focused status quo for as long as possible. In fact, I was recently asked by a Pharma Exec charged with driving patient engagement, “When do we really have to get serious about patients?” They felt that their primary customer was still the physician.

But ever the optimist, I believe that the next 2-5 years will represent a seismic shift in pharmaceutical marketing. Away from a singular focus on the physician towards a more patient-centric way of being. And that’s because patient-centricity is increasingly critical to a pharmaceutical company’s growth and financial health. As Watergate’s Deep Throat said, “Follow the Money.”

To my mind, there are four market trends that are helping to realign Pharma’s financial stars towards patient-centricity:

1. The Dawn of Health Care Shoppers-Historically, consumers exhibited very little true shopping behavior, even as they became increasingly responsible for their health care costs. This lack of true shopping behavior was largely because consumers had little visibility into costs and quality data and therefore couldn’t make the necessary trade-offs.

But that is changing.

Health care reform, combined with private sector efforts, are increasing transparency around both costs and quality, allowing consumers to start making trade-offs with their health care expenditures, including medications. Patients will move from merely asking a physician for a particular drug they saw advertised on television to making a highly considered decision to pay for drug A or drug B.

With this true decision-making, patients will be able to move markets. As this market moving ability starts to show up in pharma company regression analyses, Pharma companies will be stumbling over each other to be the most patient-centric.

2. The shifting economics of their customers-HCPs, Hospitals and Integrated Delivery Systems won’t be rewarded on the quantity of services they deliver anymore, but rather on the quality of those services and the patient experience. The smart pharmaceutical companies are going to look for ways to help their customers deliver better patient outcomes and experiences. And that is going to require additional investment to prove their patient interventions actually deliver.

3. The exploding orphan drug opportunity-Specialty and orphan drugs now represent the path to financial growth for many Pharma companies. And along with the orphan drug opportunity comes the empowered patient. These patients play a significant role in which drugs get into clinical trials, get approved by the FDA and reimbursed by insurers. If a company is in the Orphan Drug space, then by default they have to be patient centric. I predict that this “patient centricity” will eventually work its way into larger, primary care marketing practices.

4. Patient Reported Outcomes (PROs) in clinical trials will increasingly become commercial differentiators-In many categories, pharmaceutical researchers have already captured patient-reported outcomes, particularly on quality of life. However, these metrics have had little true commercial value since the FDA has been leery of approving claims based on patient reported outcomes. I believe that the FDA’s new focus on patient centricity, as witnessed by their “Patient Focused Drug Development” initiative may signal a growing acceptance of PRO claims. And as PROs become more important to the commercial success of a medication, so will the patients.

It is this alignment of Pharma’s financial stars around patient-centricity, that makes me believe that pharmaceutical companies will finally begin to truly embrace the empowered patient. Just follow the money. It never lies.