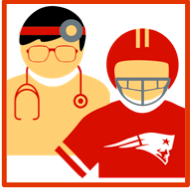 Tom Brady and Atul Gawande, two Bostonians with wildly divergent careers, both take the same approach to designing a different end game; they flout the conventional wisdom to achieve their objectives. For marketers wanting to change the trajectory of their brand, company, industry or career, these two prominent Bostonians show the power of doing things differently.

Tom Brady, the New England Patriots quarterback, has always been vocal about wanting a different end game, one that would keep him playing high-level football in his 40’s. So according to a recent New York Times Magazine article, Tom defies conventional training practices designed at building strength in favor of those that create more pliable muscles. He credits his unique training practice with sparing him from career ending injuries, ultimately enabling him to win 4 Super Bowls (so far).

Atul Gawande, Boston surgeon and best selling author, challenges the more medicine is better medicine dogma that runs deep in our American cultural veins. Gawande addresses the literal “end game” in his best-selling book Being Mortal, to propose a radical new approach on appropriate care in our last years. Rather than doing everything possible to ensure maximum patient safety and longevity, Gawande contends that instead, a doctor’s role is to ensure that people leave this earth in a way that respects their values and priorities.

To do this, physicians and family members need to understand what constitutes quality of life from the patient’s point of view. In one example, Gawande tells of a daughter’s surprise at her father’s definition of quality of life as “being able to eat chocolate ice cream and watch football.” Her father had been a professor emeritus so she assumed he would not have wanted to live unless it was as a fully functioning intellectual. It was this knowledge that helped her make an entirely different choice for her father when faced with a life and death decision by her father’s surgeons.

I wasn’t so lucky with my father. The idea that more medicine, more effort, is not always appropriate was a totally foreign concept to me for most of his illness (and most of my life). So the poor guy cycled in and out of the hospital to rehab a number of times, getting weaker with every visit. By the time a palliative nurse friend of mine, helped me to see the light, it was too late. Having made the decision to bring him home after our post-dinner talk, I received a call the next morning that he had died in the Rehab institution.

While I can take comfort that my father seemed to enjoy all the attention he received at the Rehab facility, I often wonder if he would preferred a different ending. With my 88-year old mother, I have an opportunity not to make the same mistake.

The lessons of Gawande’s Being Mortal and Tom Brady’s historic Super Bowl victory transcend their individual career choices. Their work is testament to the truth of Einstein’s definition of insanity–doing something over and over again and expecting a different result. These two different men offer the same valuable lesson about the need to challenge the status quo to achieve a different result.

In the pharmaceutical industry where my company, extrovertic, does most of its work, there is a lot of organizational dogma about how to drive sales. It includes “HCPs write prescriptions, not patients,” or the time honored “the sales representative call is the best way to reach physicians.”

I know a lot of talented and progressive marketers who are confronting these doctrines on a daily basis. It’s hard work to be the one constantly going against the grain. But the experiences of Tom Brady and Atul Gawande are proof that a successful end game is worth the fight.